"Future generations are unlikely to condone our lack of prudent concern for the integrity of the natural world that supports all life"
Rachel Carson, Silent Spring, 1962

The risks of climate change and ecosystem collapse as a result of human action have been known about for many decades. Yet global greenhouse gas emissions have continued to rise steeply.

In 1949, Professor Aldo Leopold, ecologist at the University of Wisconsin, made clear the damage we were doing to our land: "One of the penalties of an ecological education is that one lives alone in a world of wounds. Much of the damage inflicted on land is quite invisible to laymen. An ecologist must either harden his shell and make believe that the consequences of science are none of his business, or he must be the doctor who sees the marks of death in a community that believes itself well and does not want to be told otherwise."

Global warming and its associated risks have been known about for over 40 years. Back in the 1970s, American multinational oil and gas corporation Exxon were aware of the likelihood and risks of human caused climate change.

In 1988, climate scientist James Hansen testified before the US congress, provoking the New York Times headline: "Global Warming Has Begun, Expert Tells Senate". That same year, the Intergovernmental Panel on Climate Change (IPCC) - a massive body of thousands of scientists who volunteer their time to review the science relating to climate change – was founded as part of the United Nations to inform international negotiations. Since then the IPCC has published five massive reports, and many more interim reports, detailing the science of climate change in ever-starker detail.

Yet the warnings were ignored or down-played.

In 1992, the Union of Concerned Scientists, including the world’s leading scientists and the majority of living science Nobel laureates, published the "World Scientists’ Warning to Humanity", calling on humankind to curtail environmental destruction and warning that “a great change in our stewardship of the Earth and the life on it is required, if vast human misery is to be avoided.” The authors feared that humanity was pushing Earth’s ecosystems beyond their capacities to support the web of life, and described how we are fast approaching many of the limits of what the biosphere can tolerate without substantial and irreversible harm. They implored that we cut greenhouse gas emissions and phase out fossil fuels, reduce deforestation, and reverse the trend of collapsing biodiversity. Indeed, a few years later, in 1995, the UN Environment Programme also warned that the Earth’s biological resources were under serious threat.

The warnings were still not heeded. On the contrary, the rate of greenhouse gas accumulation in the atmosphere between 1987-2019 (since when the dangers were first known) was four and a half times faster than it was between 1955-1986. In fact, more than half of our total fossil fuel emissions have been emitted in the last three decades. The graph below shows just how rapidly and how consistently our emissions have been rising, even since various climate warnings have been issued and climate treaties negotiated. 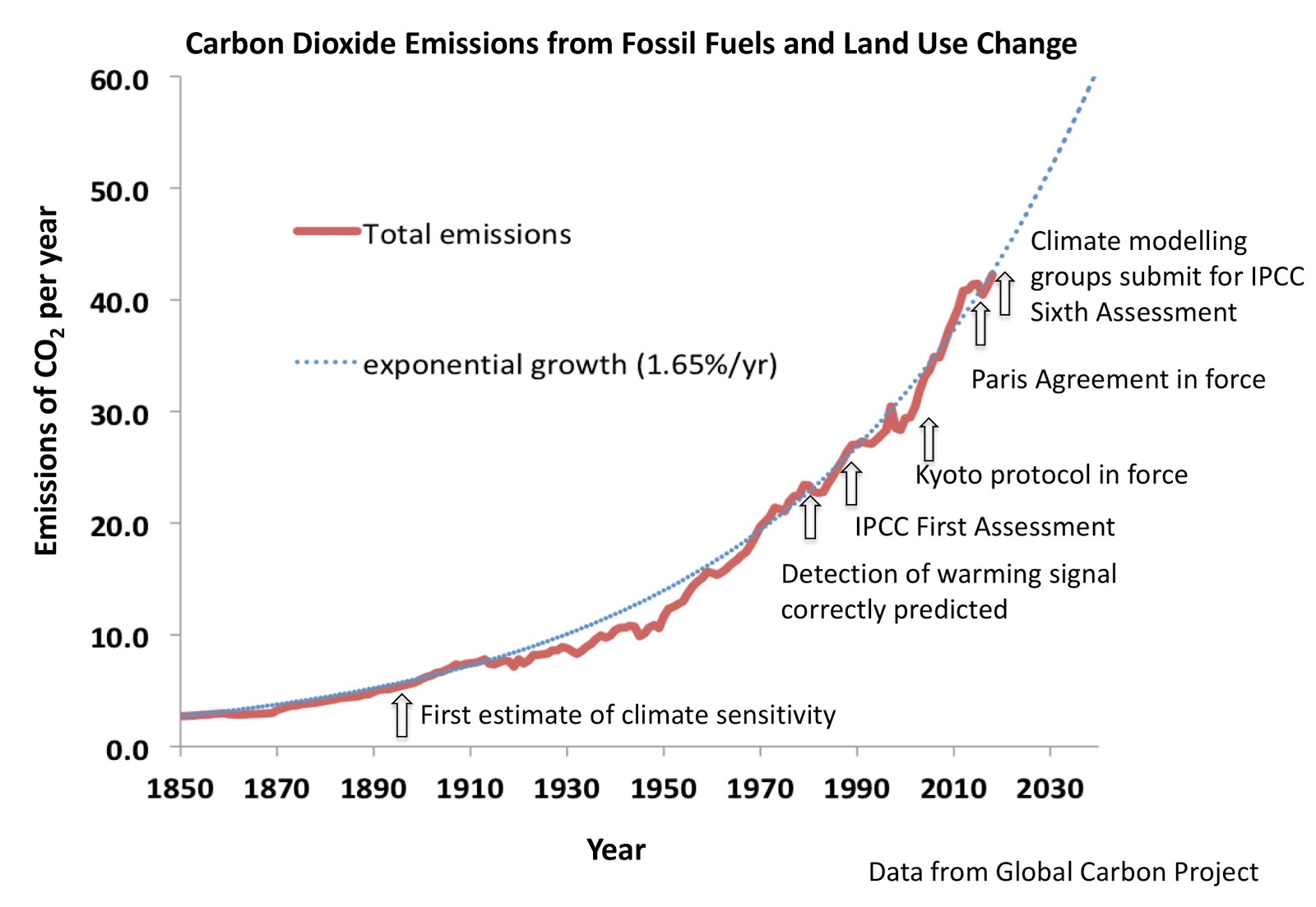 In 2017 there followed a second, even more urgently worded letter from the Union of Concerned Scientists: "World Scientists’ Warning to Humanity: A Second Notice", which was signed by more than 15,000 scientists. A few years later, the urgency was made crystal clear by more than 13,000 scientists from 156 countries who signed the "World Scientists’ Warning of a Climate Emergency". In it they declared that "Scientists have a moral obligation to clearly warn humanity of any great existential threat ... Based on this obligation and the data presented below, we herein proclaim ... a clear and unequivocal declaration that a climate emergency exists on planet Earth."

Now, after almost 40 years of warnings and 30 years of international climate negotiations, we have precious little to show for it. On the contrary, carbon emissions from burning fossil fuels have increased by over 50% since 1990. If we are to prevent disaster, the time for action is now.

As Professor Sherwood Rowland, Nobel Prize Winner in Chemistry for discovering how we were destroying the ozone layer said: "What’s the use of having developed a science well enough to make predictions if, in the end, all we’re willing to do is stand around and wait for them to come true?"