The temperature at the Earth’s surface is controlled primarily by the levels of certain gases in the atmosphere, such as water vapour, carbon dioxide and methane. Although these gases only make up a tiny fraction of our atmosphere (current carbon dioxide levels are around 410 parts per million (ppm), which is just 0.041%), just like how a drop of ink can affect the colour of a huge volume of water, tiny amounts of these gases can have enormous impacts on our atmosphere. Due to their special structure, these molecules can absorb heat emitted from the Earth’s surface as a result of it having been warmed by the Sun, preventing some of that heat from escaping back out into Space. In this way, it can be said that the gases provide an insulating ‘blanket’ around the Earth, which traps heat in our atmosphere keeping us warm.

The greenhouse effect, in its natural form, is essential for life here on Earth; without greenhouse gases in our atmosphere, the average temperature at the Earth’s surface would be around -18°C, dropping to temperatures at night that would be far too cold for us to survive. However, by burning fossil fuels (as well as by farming cattle, growing rice, burning trees, intensively ploughing soil and using chemical fertilisers) humans have been adding huge quantities of additional greenhouse gases into the atmosphere, ‘supercharging’ the greenhouse effect beyond anything that humans have ever experienced. 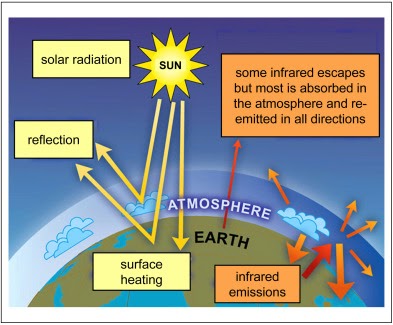 Carbon dioxide is by far the most important greenhouse gas - responsible for approximately 75% of the Earth’s human caused heating - because it is emitted in much larger quantities than any of the other ‘long-lived’ greenhouse gases. It also has an extremely long lifetime: any excess can stay in the atmosphere for hundreds or even thousands of years and therefore it accumulates in our atmosphere, increasing its concentration. Concentrations of carbon dioxide have now increased by over 40%, from around 280 ppm in preindustrial times to over 414 ppm in July 2020 and rising.

Water vapour is also a greenhouse gas and occurs in our atmosphere in higher concentrations than carbon dioxide. However, the amount of water vapour in the atmosphere is controlled by the temperature of the air (increasing by around 7% with every degree celsius of increase in air temperature), rather than by human-caused emissions. For that reason, the amount of water vapour in the air is seen as an ‘amplifying feedback’ that increases global heating, rather than the initial cause of such heating.