"World leaders should be listening not just to scientists but also to the people who are being affected by extreme weather events right now. They are seeing it with their own eyes and suffering from it. Humanity just won’t be able to cope with the world we are heading for."
Professor Peter Stott, the Met Office

"The analysis clearly shows climate change has already changed our weather patterns and is having adverse effects on people’s lives. It is beholden on all governments to take heed of these warnings and start cutting carbon emissions as quick as possible."
Professor Mark Maslin, University College London

"We are seeing increases in extreme weather events that go well beyond what has been predicted or projected in the past. We’re learning that there are factors we were not previously aware of that may be magnifying the impacts of human-caused climate change... Increasingly, the science suggests that many of the impacts are occurring earlier and with greater amplitude than was predicted"
Professor Michael Mann, Director of the Earth System Science Center at Pennsylvania State University

Global heating is having a huge impact on our natural weather systems. This is because the increased amount of heat energy trapped in the Earth’s atmosphere and oceans (as a result of greenhouse gas emissions) increases the /total amount of energy* in our weather systems. As a result, global heating doesn’t just cause an overall rise in global temperatures, it also leads to more frequent and more extreme heatwaves, heavier rainfall, and more intense tropical storms and hurricanes. Generally, wetter areas are getting wetter, increasing the risk of flooding, and dryer areas are getting drier, increasing the risk of droughts and forest fires.

There also is growing concern that global heating might be causing further disruption to our weather by /weakening the jet stream* - an air current that carries air around the globe and contributes to worldwide weather patterns. It is thought that a weakening of this current could lead to a "blocking" of our weather systems, increasing the likelihood of extreme weather events such as storms and floods, and making heatwaves and droughts last for longer periods of time. This could also explain why some areas are having more extreme cold periods despite the world getting hotter overall.

The number of extreme climate-related disasters - including extreme heat, droughts, floods and storms - has doubled since the early 1990s and studies have shown that more than two thirds of all extreme weather events investigated were made more likely, or more severe, by human-caused climate change. 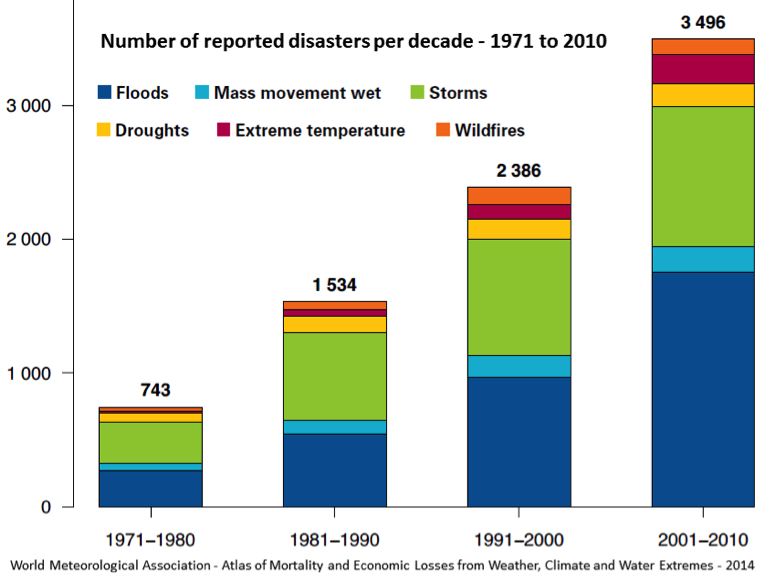 Image source: in "Atlas of Mortality and Economic Losses from Weather, Climate and Water Extremes (1970-2012)"

It should be noted that the total number of people killed by such events is actually decreasing - an argument used by climate skeptics to claim that such events are not getting more frequent. On the contrary, this just shows that we are getting better at predicting extreme weather events and getting people out of harm’s way in time. Looking only at death rates massively misrepresents the human, agricultural and financial impacts of the ever-increasing numbers of extreme weather events.

Indeed, the economic costs of damage caused by natural disasters are skyrocketing. Whilst its true to say that ‘natural disasters’ include those not related to climate change, and economic costs can go up simply due to there now being more infrastructure that can be damaged, we know that financial losses due to extreme weather events are rising faster than those due to non-climate related disasters, such as Earthquakes.

Indeed, in 2017 extreme weather disasters caused overall losses of US$340 billion, the second-highest annual loss ever. Less than half of these losses were covered by insurance. According to Morgan Stanley, from 2016-2018 climate-related disasters cost the world $650 billion.

Christiana Figueres, former United Nations’ Climate Chief, warned: "We are moving towards a world that the insurance industry calls systemically uninsurable because the degree of destruction will be such that the insurance companies cannot deal with the level of risk that would be brought upon us. The expense of a constant construct, reconstruct, reconstruct, frankly, no country can afford."

The following sections explain some specific ways in which global warming is already affecting our weather. Follow the links to read about how extreme weather is predicted to be impacting our world by 2050 or by the end of the century.