"Nothing really compares to beef, lamb, pork, and dairy - these products are in a league of their own in the level of damage they typically do to the environment, on almost every environmental issue we track."
Dr. Joseph Poore, environmental scientist at the University of Oxford

Currently a massive 26% of the planet’s ice-free land is used for livestock grazing, with an area the size of Panama (18 million acres) being lost to livestock production each year.

In addition, livestock have a huge impact on global heating. Firstly, the enormous amount of land required for the grazing of animals and the growing of animal-feed is acquired through the clearing of carbon-rich forests, releasing carbon dioxide back into the atmosphere. Secondly, cows and sheep release an enormous amount of methane - a powerful greenhouse gas - in their burps and farts. In a single day, the 1.5 billion cows on our planet produce around 680 billion litres of methane (some calculations make it more like 500-650 litres per cow per day, ie 975 billion litres in total!). Thirdly, livestock are responsible for 65% of all human-related emissions of nitrous oxide due to the use of fertilisers to grow feed and the production of animal waste. Nitrous oxide is an extremely potent greenhouse gas nearly 300 times more powerful than carbon dioxide.

Overall, replacing all animal products with plant-based products (and allowing the land freed up to regrow) would be the equivalent to reducing global greenhouse gas emissions by a staggering 28%. (It is often claimed that it is more like 50%, but that reasoning is scientifically flawed, as explained in this blog.) Indeed, deforestation, cow burps and farts, and fertilisers produce more greenhouse gases than all the world’s cars, lorries and planes put together.

In addition, keeping livestock is an extremely inefficient way to use the Earth’s land and its limited resources to feed us. More than four fifths of the world’s farmland is used for livestock, but livestock provide less than one fifth of the world’s calories - and only about one third of our protein. It’s not just about the land taken up by animals themselves. One third of the world’s croplands are currently being used to grow food for these livestock. It would be far more efficient to feed these crops directly to humans: approximately 90% of energy is lost between each stage in a food chain, so we could feed far more humans by eating crops directly rather than feeding them to livestock and then eating the livestock.

Indeed, it has been calculated that cutting out livestock and replacing the calories with plant products would free up 76% of the world’s agricultural land for reforestation, habitat restoration and other less intensive forms of agriculture.

Livestock farming also uses up precious water. Producing a kilo of beef requires 50 times more water than for a kilo of tomatoes, cabbages or potatoes, and a kilo of chicken requires 14 times more.

Farming cattle is particularly bad for the planet. Not only do cows take up an enormous amount of land, but for every 100 g of protein, beef produces up to 105 kg of greenhouse gases, while tofu produces less than 3.5 kg and nuts, peas and pulses produce even less. Grass-fed or organically farmed cows don’t actually help much: in fact they can actually make things worse as letting cows roam freely might be better for the cows but it uses up far more land. 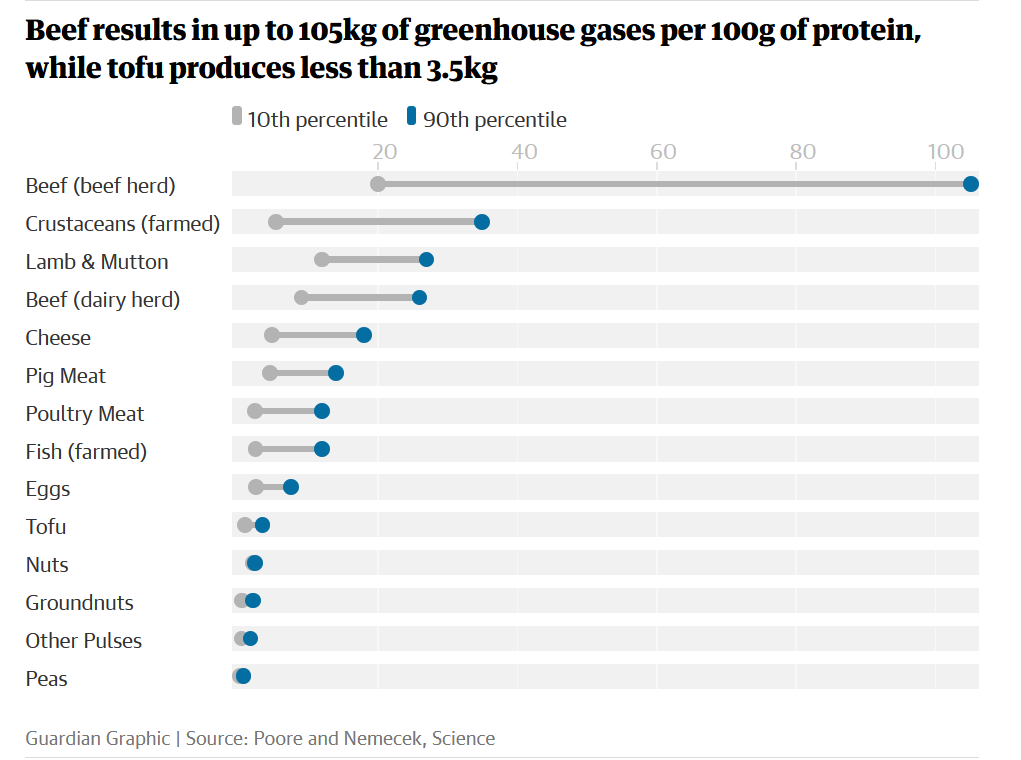