How to Organise on the New Communication Services

If you are a Circle, major Working Group, Regional Group, Affinity Group or Local Group, you will be invited onto the new tools as an Organisation. The first thing you have to do is to fill in a form explaining what facilities you need. This document hopes to help you make those decisions.

In XR, we have Circles (Anchor Circle), Working Groups, Regional Groups, Local Groups, Affinity Groups, Teams and maybe some other names for groups of people who work together.

Our chat platform, Mattermost, has Teams which are like a whole section devoted to one set of discussions - e.g. xrGlobal Team, UK Team, East of England Team.

Our UK Forum and UK Cloud platforms have Forum Groups - for security; a list of people who have access to things -- forums and folders.

So I have devised the term "Organisation", defined to mean a circle, working group, or whatever that works together and uses the same areas on our new communication tools.

An organisation will have Channels to chat in on Mattermost. They may have a whole Team, giving them more control over who can see their public chats, at the expense of dividing the chat up into separate silos, or they may simply have channels within the UK Team. Each nation and region in the UK has a Team, for example, to help cooperation between their local groups.

They will have two forum groups on UK Forums - one public, that anyone can join, and one private that only people in the organisation can see. They will have at least one public Reception forum linked to their public group, and may have one or more private forums.

They will have a security group and (optionally) a folder on UK Cloud - only members of the organisation can upload files and create folders in their folder.

Dividing yourself up into organisations

We are a self organising system, so you can organise how you want.

This document is just trying to give you good examples so everyone doesn't have to reinvent the wheel, and think it all out for themselves.

But, if you go your own way, the Digital Discussions Applications Team would really like to know what you are doing before you do it - we may be able to help, we may be able to point out advantages or drawbacks you haven't thought of, and we may ask to use your ideas to help and inspire others.

Do post in Digital Discussions Applications Team Reception public channel or Tech Champions & Group Admins private channel (in UK Team on Mattermost) if you have a good idea, or need advice on the best way to achieve what you want.

Most local groups consist of a few hundred people, of which a few tens of people are active members of working groups. And those active people are often in more than one working group, and often want to communicate with the whole membership, and with other working groups.

Therefore the default we devised consists of a single organisation, with a number of forums - one for each working group, plus probably some more for other long term groups of people working together,

Everybody in the organisation is able to see all the forums, and can dip in and out of them as they wish. If someone is really not interested in one or more forums or channels, they can mute them, thus avoiding notifications when new topics and replies are posted. This should be fine for most local groups.

Sometimes there is a privacy issue, when a working group has data that should not be visible to the whole organisation. Our solution to this is for the working group in question to set themselves up as a separate organisation (the Group Admin for the organisation uses New Child XR Group on the Hub to create a new form to fill in). The working group will then get their own private area away from the gaze of the rest of the local or regional group.

Each Regional group is an organisation. If someone is invited to the region, they automatically see all the public and private areas belonging to the region.

UK Working Groups provide services to the rest of XR. They should be visible to the whole of XR, by having a Reception Channel in the UK Team on Mattermost, and a public Reception Forum in the appropriate category on Forums. The easiest way to achieve this is for them to be a separate Organisation (Organisations get both of these automatically).

Do I need File Storage on UK Cloud?

Everyone on the new services has access to a public Library of documents. The Library is divided up into areas, and each area is maintained by a working group. So, if you don't have files that you need to keep private to your organisation, you don't need to bother with a private file area - just ask the Librarians working group (via their Reception on Mattermost chat UK Team, or on UK Forums) for a public area you can maintain.

How to organise Mattermost chat

Mattermost chat is very open. Anyone can create new channels - but please do so sparingly, and with the agreement of people in the team. You can delete channels on the Hub, but this actually only archives them under an obscure name, so they still take up space on the server.

Mattermost chat is divided up into Teams. Only people invited into a Team can see the Channels in that team, or see other people in that Team. Each region and nation has its own Team, divided up into chat channels for working groups, local groups, and cross-group discussion. Local groups will usually just be part of their regional team.

You will be given a public Reception channel in the UK Team (unless you have a particular reason why you don't want anyone else in XR to be able to contact you through Mattermost - if so, add a note in your form explaining why you think this is justified).

You will be given a private chat channel in your Team (unless you really don't want one - again, ask in the notes if so).

Here is how East of England have organised their Mattermost chat:

They have channels for each local group, plus general EoE channels for region wide chat. They devised this scheme all by themselves, but it's a shining example of how to organise.

Arrestee Support work during the rebellions to record and track arrestees as they are arrested, get support outside police stations as people are released, and follow up through the whole legal process as people go to trial (and are acquitted, hopefully). They are a normal working group, and have an organisation on the Hub, with chat channels on Mattermost, forums on UK Forums, and a private file area on UK Cloud.

But they have a smaller group of people who manage the actual data about the arrestees. This data is extremely sensitive, and not everyone in the working group has full access to it. They created a subgroup organisation with its own data area on the UK Cloud, and its own private forum and chat areas to discuss the data. All the members of the subgroup organisation are also members of the Arrestee Support organisation, and can join in the discussions with the whole working group.

Communities is a high level working group in XR UK. Here is their GlassFrog picture: 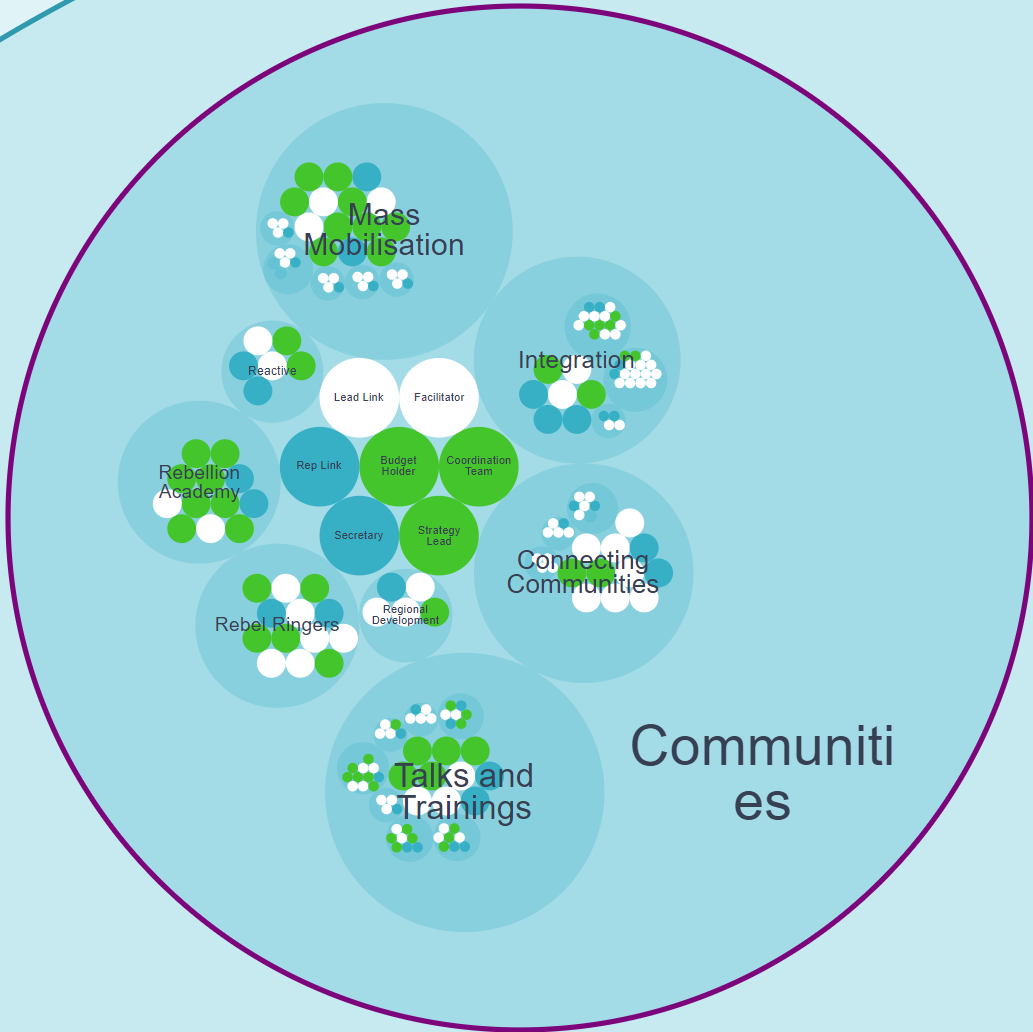 Many of those working groups have their own private file storage area on UK Cloud, too, because they have private data not shared with the whole of Communities (e.g. Integration will have personal information about potential members).