Can I migrate my email list to Action Network?

First off, make sure the Data Team (the team responsible for administrating XR’s Action Network system) is aware that you are migrating your list. You can reach them on the Mattermost Data Team Reception channel. We’d like to be involved so that we can make sure the process is done properly to keep your group, your list members, and XR as a whole safe and happy.

Secondly, ask yourself the following question: Did the rebels on my list opt-in to giving their emails to and receiving emails from Extinction Rebellion in general?

You would answer this question by thinking about how the emails were first collected. Were rebels given a form to sign up? Was their information written down by someone in your group during a rebellion? Think about what these people were told and what they could reasonably expect to receive based on the information they were given. In many cases, the rebels on independent local/affinity group lists have not opted in to giving their data to Extinction Rebellion at large.

If the answer to question is yes, then you can migrate your data directly from your own list to the Extinction Rebellion Action Network system. How to migrate to Action Network reference.

If your rebels have not agreed to give Extinction Rebellion as a whole their data, then you must send your subscribers to an Action Network form where they can sign up. The reason for this is that to be compliant to GDPR, a person must give their informed, affirmative consent. Part of being informed is knowing who holds your data and who they can expect to be emailed by. For many groups, they only included an opt-in to their particular group when people originally signed up, not to Extinction Rebellion in general. When set up with the proper disclaimer text, using Action Network signup forms means that we can be certain that rebels have provided the GDPR-compliant consent to be a part of the Extinction Rebellion Action Network system.

The default behaviour in Action Network when an email list is uploaded to a particular group is to subscribe the users not just to that group, but to its parent and grandparent groups as well. This is good in that it makes XR supporters available for communications from Global, XR UK and regional levels, which send information about large-scale rebellions as well as fund-raising. However, if your rebels haven’t agreed to those communications, they could object to start receiving them unexpectedly.

For rebels who do not already exist in Action Network, Our suggestion would be to set up a series of emails with a clear and prominent message that to continue receiving emails from your group, they must fill out a form at a link that you provide. You could set up the email series to continue targeting only the rebels who have not clicked the sign-up link in the previous email. After 3 warning emails, delete your list in your original system and begin sending emails from Action Network. Inevitably, this means losing a proportion of emails on your list, but it’s likely these were disengaged members unlikely to attend future events. 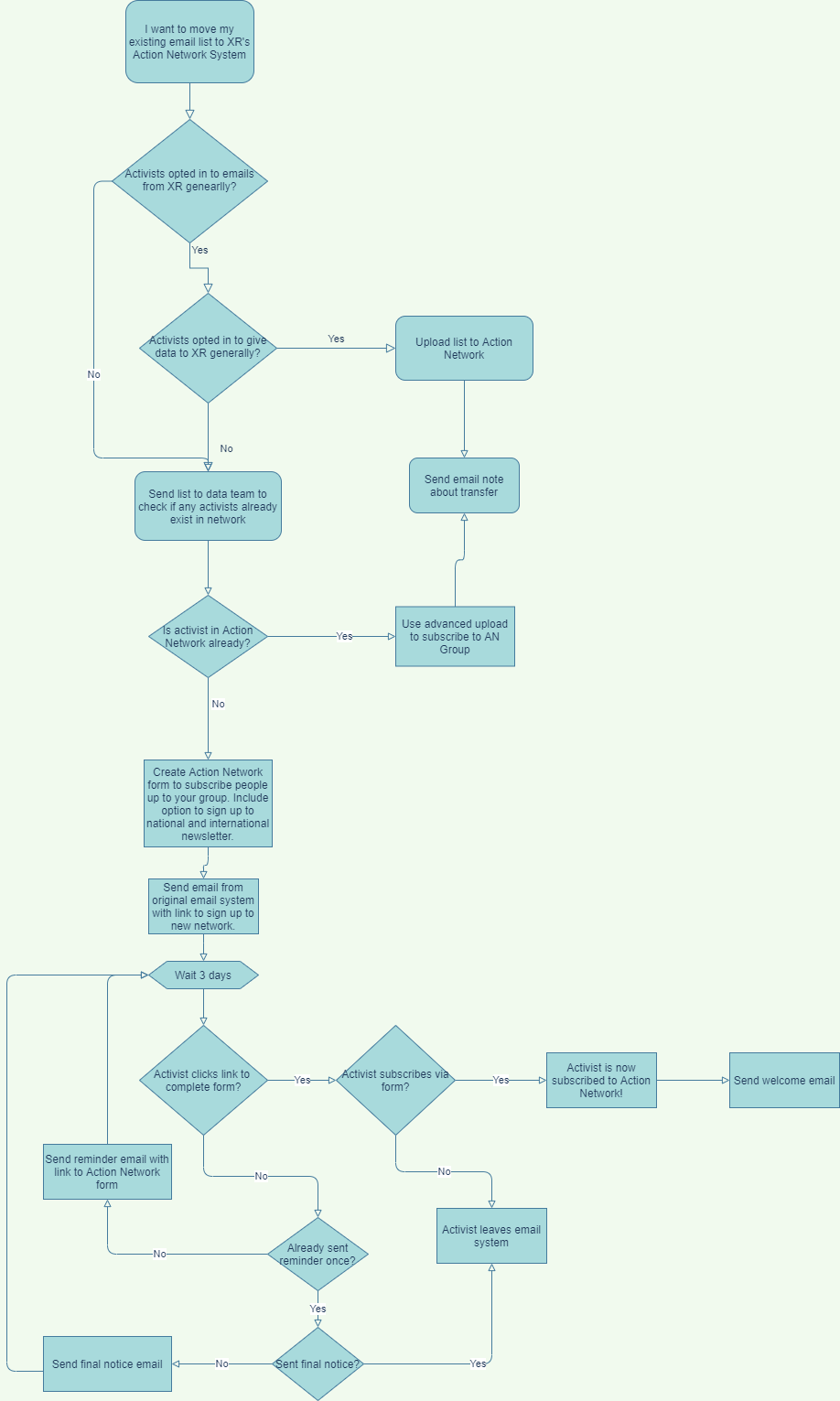